Hello Blogosphere! My sincere apologies for being MIA this week, my days in Beijing left me exhausted and so I wasted days in bed attached to my book. Having now finally finished all three Game of Thrones books I’d taken with me to Shanghai, I’m completely free to blog, study, cook and all the other things that seem somewhat meaningless when an author pulls you into his character’s adventures. So, to make a long story short: I’m Back. And so first things first: an update about my time in Beijing, China’s beautiful albeit incredible overcrowded capital.

31 September,
5:53pm
Our train to Beijing had just departed. Without us. We had (very cleverly) managed to miss our super-fast train by 3 minutes due to a series of uncoordinated metro transfers. I’d never missed a train before. Well, not one this important to such a far-off destination. And apparently, contrary to most trains in the Western European countries I’ve been to, Chinese trains actually depart and arrive on time. Very refreshing, but in this case actually a little bit annoying. Having missed the last speedy train to Beijing for that evening, we ‘upgraded’ our tickets to a soft-sleeper night-train that would get us to the capital in 11 hours instead of our planned 5 hours. It turns out turning up late was a blessing in disguise: the sleeper-train was incredibly comfortable. My little bunk bed provided me with the best 9 hours of sleep I’ve had since coming to China. No light shining through my super thin curtains, no noisy construction starting at 5:00am… Perhaps I should miss the next train on purpose just so I can catch-up on my beauty sleep?

1-4 October
Thankfully, our unlucky timing (a.k.a. extremely stupid lateness) concerning our train was the first and last ‘adventure’ that went wrong on our trip. Our hostel was a true backpackers/student/cheap lodging, with its own bar, squatting-toilets, dingy showers, and packed with international people. They provided slippers, which was very pleasant seeing as the shower looked like it hadn’t been cleaned in days. Scrap that, years. The location, however, was perfect. With an early start every morning, we feasted on large Western breakfasts in the cute little cafés that dotted the area. Afterwards, my flatmate and I parted as I went to visit the sites Beijing is famous for.

My sightseeing adventures were some of the most uncomfortable experiences I’ve had as a tourist so far. National Week being a week when everyone has time off work, it’s (apparently) one of the worst times to travel to big cities. It felt like half of China had migrated to Beijing for the holidays, and wanted to visit the exact same places as me at the exact same time. The time I spent queuing for the Forbidden City and the Summer Palace wasn’t even the worst thing: it were the suffocating crowds of people that push and shove and make it impossible to stray away from the direction they’re headed. All the other ‘foreign’ (..Western) tourists seemed to have disappeared too, which meant I was looked at as if I was George of the Jungle in the middle of New York. Or a Masai Tribes man in central Amsterdam. It was interesting, to say the least. The palaces, however, were old and beautiful. Feeling like a packed sardine or a monkey in the zoo didn’t take away from the majesty of it all. 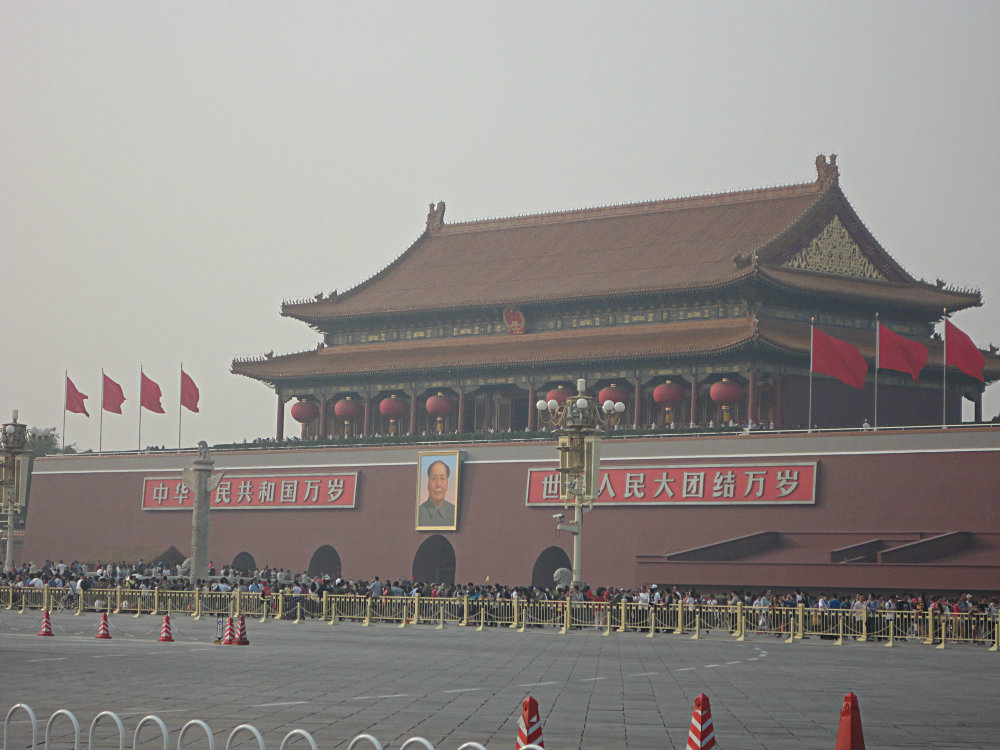 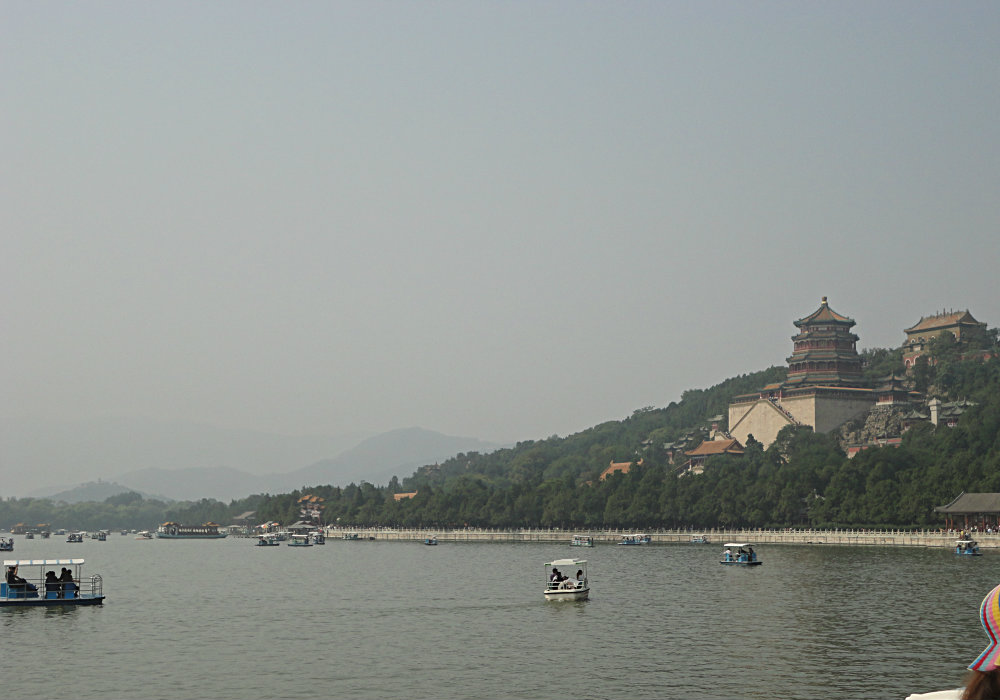 Now I hear you thinking: “4 days in Beijing and all she saw was the Summer Palace and Forbidden City?!” Well, my attempt to visit the Great Wall failed miserably. I’ll show you why: 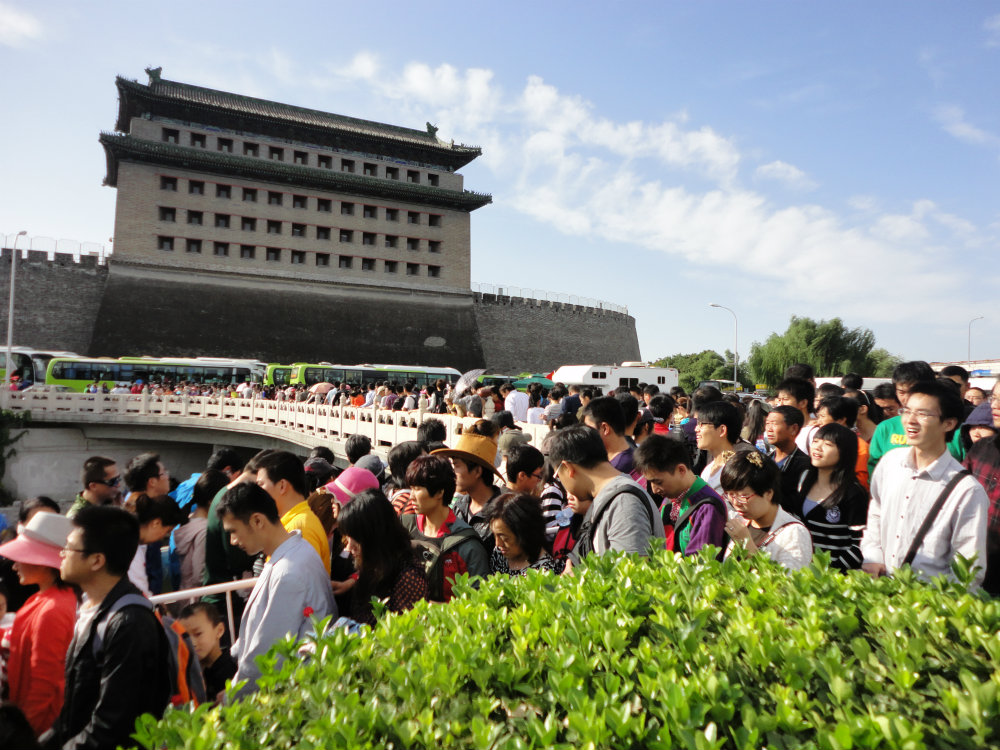 The buses in the first picture are the ones headed for the Wall. The queue started there somewhere, the looped around below the bridge, then back again towards the buses. I gave up any hope of catching a bus to Badaling within seconds of arriving at the bus station. But Hey: it gives me another excuse to visit Beijing.

My camera was attached to my hand, and our little trip to Dashilar for Beijing Design Week caused me to transform once again into my snap-happy self. I literally took hundreds of pictures in the streets of Peking. It will take a little while to sort through, but my next post will feature some of my favorites. Hopefully, I’ll get my act together and blog in 2 days.

Tagged: Out and About