Halloween + Article of the Week

Article of the Week, Shanghai4 November, 2012No comments 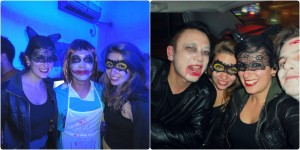 My colleague at work (did I fail to mention I had an internship? More to follow about that!) asked me on the 31st if Halloween was ‘an important festival’ in my country. Somewhat astonished, I replied that it was not like Christmas and tried to explain that it was not actually a proper holiday. I’m not sure how effectively I communicated this fact, however, as I left the office with a ‘Happy Halloween and festivities’ wish. To be honest, it made me giggle and very curious as to what the Chinese think of our weird costumes and trick-or-treating tradition.

As it turns out, the clubs that dominate Shanghai nightlife have learned to put on events on this ‘special Western day’. Being out on the 31st made me feel like I was back at Loughborough, surrounded by students who use any excuse to dress-up. What did I go as? Batgirl. My flatmate was Catwoman. We even managed to find someone dressed up as the Joker! But the most interesting thing I heard about the evening? Over the weekend there was an ‘STD party‘. Yes, I know what that sounds like. No, it wasn’t an event to promote safe-sex. STD is an entertainment organization that (apparently) throws some great parties all over mainland China. It doesn’t get any weirder than that.

Article of the Week

Now, as it’s the end of the week, I’ve got a couple of articles to share. This time, they’re about Xi Jinping, the man expected to be China’s next president in its once-in-a-decade change of power. The BBC has a whole page featuring articles about ‘China’s New Leaders‘, which includes profiles on those who are going to be leading the country and articles with topics ranging from how to rise as a political figure to how the Chinese ‘view a multicultural world’.

The most interesting article I’ve read about the political change-over, however, was sent to me by my very smart friend Sini, who found an article in the Economist about the challenges Xi Jinping has to face over the next decade. Titled The Man Who Must Change China, the author not only describes the economic difficulties facing the nation, but also describes the rise of public awareness and dissent. The Economist describes several political changes that Xi Jinping should attempt to introduce, including the privatization of farmland, freedom of press, and allow its financial markets to respond to economic signals. Whether this will happen is very questionable, but the article is definitely worth a read for all of those interested in the men (and the few women) that will be ruling one of the most important and influential countries of the 21st century.