3 weeks ago, my flatmate O. and I went on a trip through Yunnan. In line with the “we’re students and we like things cheap” ideology, we spent an insane amount of time on trains and buses. My first experience with a Chinese sleeper-train was when we traveled to Hunan in December, and I actually had an extremely good night’s sleep. In fact, we took a 37-hour train ride from Shanghai to Kunming (Yunnan’s capital) at the very start of our trip too, which was really quite pleasant. My experience on our latest train however, was a 13-hour journey from Kunming to Nanning, which turned out to be a little less supportive of my sleep-needs… Below is an account of what to expect of a night on a sleeper-train in China. 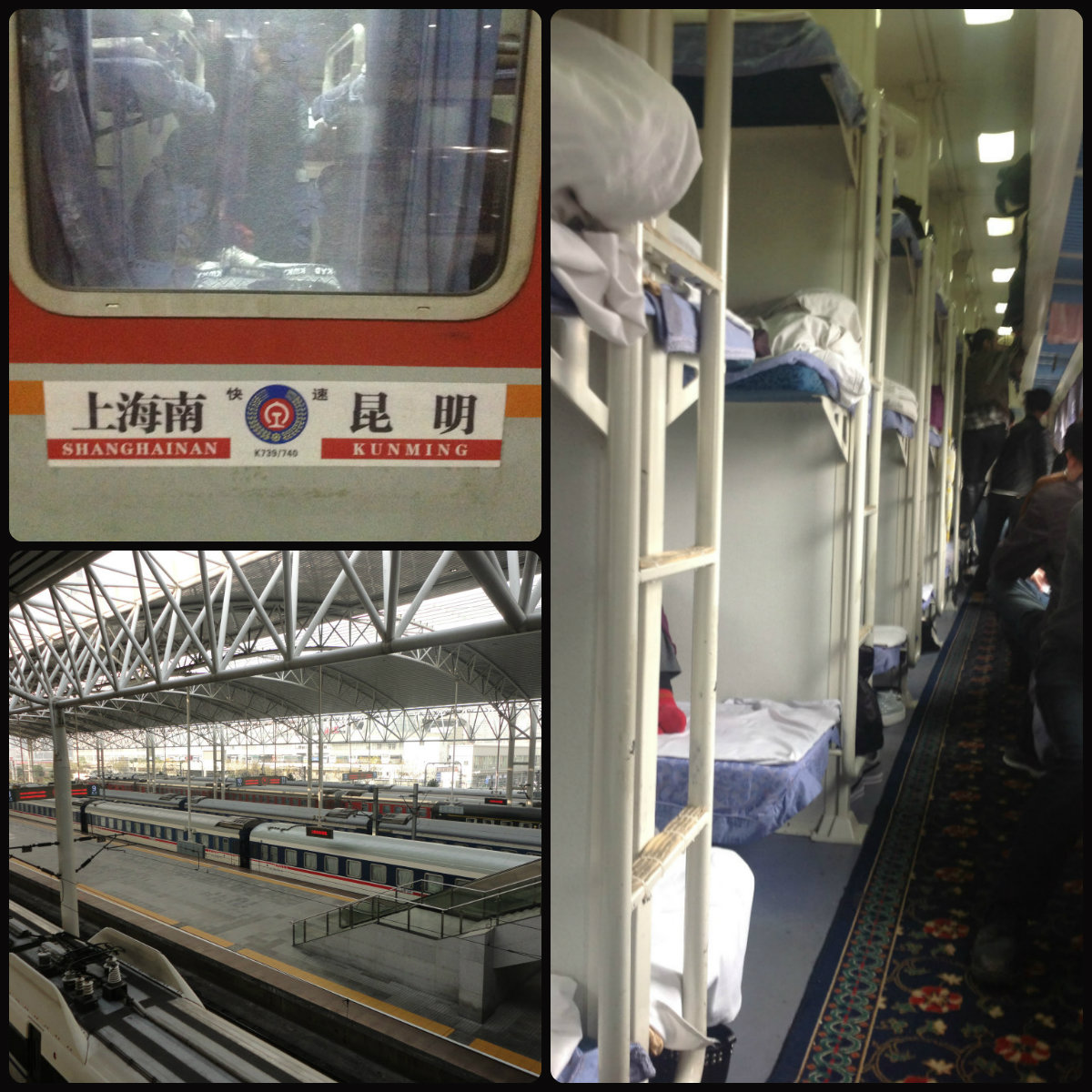 As you crawl into the top bunk of your hard-sleeper (it’s the cheapest of the stack of beds), you discover that the only thing to do is lie-down, as the low roof makes hitting your head a very frequent occurrence. You take out your book for some night-time reading as Chinese music plays away from the train speakers located directly opposite your head. The lights suddenly and seemingly without warning turn off at exactly 10pm, making further reading physically impossible unless you’ve got superhuman vision. You put your head down on your little pillow, carefully adjusting your tshirt to make sure it acts as a sufficient buffer between the overused case and your face, keeping your fingers crossed that random black hairs from previous sleepers won’t make their way into your golden lock’s all the same.

Just as you drift to sleep in-between the rumbling snores of your neighbor below, the mystery of who will fill the other half of the until-now empty carriage is solved. 50 women with big suitcases and backpacks with sunhats dangling by their cords file in, babbling away excitedly in their local Chinese dialect. Their voices combined sound remarkably like chickens in a coop or, as my parents would put it, fishwives shouting for attention at the morning market. This cacophony of sound continues for another hour until the hens have found their nests, at which point another passenger, rather than walking to the end of the carriage as regulation prescribes, has lit up a cigarette and the lovely smell of smoke drifts up to your already polluted lungs. When the air finally clears, you welcome to now familiar smell of sweat mingled with nylon-socks and fangbianmian (directly translated: ‘convenient noodles’, or as we call them: ready-made noodles).

You turn in your little bed, wistfully thinking of the sleep that had been within reach an hour before. Not even Mumford and Sons blasting through your headphones can mask the snoring competition that is unfolding between the two men sleeping on the bottom bunks, however. With a sigh you retrieve your book and attempt to read by the weak light of your iPod. When there is finally a short pause in the rumbles, you grab your chance. Exhausted, your eyes close, and the train rocks you to sleep at last as it stumbles across the track.

You’re pulled out of your dream about walking through Yuanyang’s beautiful and picturesque rice-fields after what feels like 10 minutes of sleep. The train lights turn on an hour and a half before it pulls into its final destination, followed quickly by what sounds suspiciously much like Chinese propaganda music blasting from the speakers. Any hope you had of dozing off despite these obvious wake-up calls is crushed when the hens scramble down from their beds and play a game of who can listen the least and talk the loudest.

You crawl down and plop yourself down on one of the seats that line the corridor. Despite your tiredness, you decide to make the most of your day and so begin chatting to your flatmate, who happened to have an amazing night’s sleep. People scuttle past with their breakfast: fangbianmian or an overpriced version of whatever the dining cart has to offer. Two men dressed in overalls come into the carriage, and you discover why your pillow case was covered in hair, and the sheets of your little bed were a suspicious shade of grey rather than a crispy white. They were, in fact, unwashed. The men jump up like monkeys and, without changing the sheets, start making the bed for the next passengers.

When the train finally rolls into its destination, you stretch and pluck your bag from the floor. You’ve made it. And when you think about it, you’ve saved a lot of money and lived through a true China experience. Surely that’s worth missing a night of sleep for?