Article of the Week, China13 November, 2012No comments

Last week I decided it was time for some proper sight-seeing, and so, as recommended by my flatmates, I headed over to the Shanghai Propaganda Poster Art Museum. This small museum is located in an unassuming apartment complex, but its 3-rooms are filled with thousands of propaganda posters from 1940-1990. Ordered by date of publication, the posters form a timelined-look of how China’s rulers wanted the public to view their actions. The portrayal of Mao’s policies and the personality cult built around him are particularly interesting. Little descriptions (written in both French and English) provide a brief overview of the time period and China’s domestic affairs and its international relations at the time.

My favorite posters were those that focus on China’s foreign affairs. The earlier posters, for example, frequently portray the United States and Britain as an evil outsiders that attempt to destroy China’s ideals and invade their nation. The Soviet Union, on the other hand, is depicted very favorably. 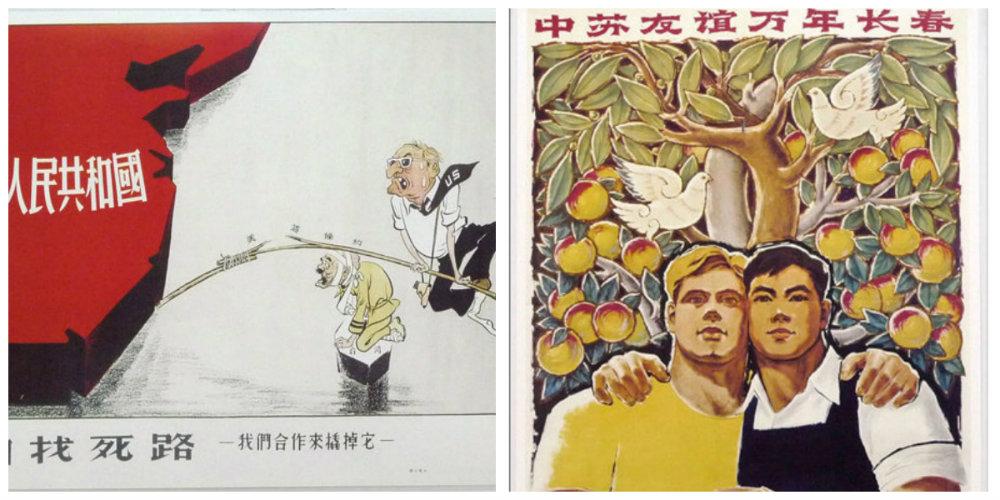 (please note that these pictures are not my own, but come from the Shanghai Propaganda Museum website).

While propaganda paintings like the ones featured in the museum seem to be a little out of fashion, China is far from being propaganda-free. I don’t know what national broadcasts are like seeing as our little student flat doesn’t have a TV (well, no fully functioning TV..), but I notice it the most on the subway. Each station and every metro has small TV’s spread along it. As well as displaying where the line goes and how long it will take for the next metro to come, the TV’s blurt out little news bulletin and clips from concerts around the country. Recently, in what I can only assume is preparation for the leadership transition, clip dominated by red-images showing people waving Chinese flags have appeared on the screens, accompanied by the sound of trumpets and other ‘upbeat’ Chinese music.

While it cannot exactly be classified as ‘propaganda’, the current political activity in Beijing has caused an even larger regulation of the internet. My classmates complain that their VPN’s (external proxies through which we can access facebook and all the other websites blocked by the Great Firewall of China) have mysteriously stopped working. Google has become incredibly slow. The New York Times is completely blocked. It’s interesting to contrast the propaganda posters displayed in the museum to the methods used by the government today to promote their policies and restrict access to opposing viewpoints.

Talking about the political transition and the changes occurring in China remind me of an article written by Damien Ma for Foreign Affairs. I realize that I didn’t post an ‘Article of the Week’ last week, so consider this one it! The article looks at whether people in China are better off today than they were 10 years ago when Hu Jintao became president. 非常有意思！ Better understood as: very interesting