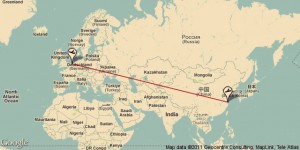 51 days ago, I got on a plane at Schiphol Airport, Amsterdam, with a heavy suitcase and an excited grin plastered on my face. I don’t think I fully realized that I was actually moving to China until the plane landed at Pudong Airport, Shanghai a day later, on 1 September 2012. Sometimes, I don’t think the realization has fully hit me even now. Luckily, I’ve not had a “what the hell am I doing living in China” moment yet. But I have witnessed and experienced some things over the past 50 days that astonish me and make me giggle. So, I thought I’d share a list of 18 little lessons you’ll learn quickly enough when visiting Shanghai!

18 Things I’ve Learning in China so Far:
1. The metros are hot, sticky and sweaty. So are the people. Learn not to take the subway during rush hour
2. If you think the metro is bad, don’t ever EVER visit the Forbidden City during a national holiday
3. It’s perfectly normal for people to blow out smoke in your face. Or to spit on the street. Or to eat with their mouths open. Accept it
4. Everyone has an iPad or iPhone. Well, except for you
5. Chinese is difficult to understand. Shanghai-nese impossible
6. McDonalds tastes the same regardless of the country you’re in. KFC does not
7. When you see what you think is a REALLY tall person, remember that everyone here is short, and that he’s probably a normal-sized guy in Holland
8. Always ALWAYS keep your camera ready and charged
9. Smile at people and they’ll smile back
10. They have every Western brand you could dream of, but none sell shoes above size 8 (38)
11. Eating food sold by street-vendors won’t kill you. Vegetables from the local market are just as fresh (and tasty) as those from Western supermarkets
12. Sometimes a Chinese squatting-toilet is more desirable than a “normal” Western one.
13. The best way to learn Chinese is to be-friend a Chinese
14. When you think a 45 minute, 100RMB taxi across town is expensive, remember that that converts into €12. And that you’d probably pay €100 if you were back home
15. When you think a 45 minute, 100RMB taxi across town is cheap, remember that you could have paid 5RMB (€0.60) for the same distance if you traveled by metro
16. Elderly men do some really funny morning exercises, which include walking backwards and hitting themselves on the chest
17. It’s okay to put tiny shoes on your tiny dog when going for a walk
18. Remember: ‘TIC’. ‘This is China’

I wonder what Shanghai will teach me in the next 50 days. Hopefully more Mandarin, of course, but I hope to be able to share another list of 18 things on 8 December, 2012!